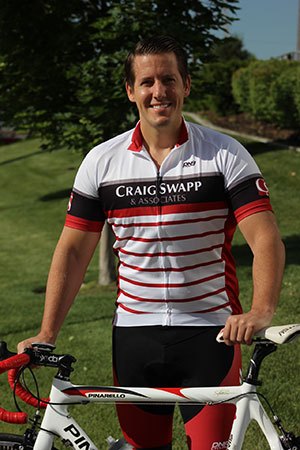 Personal Injury Attorney Steve Redd took up cycling in 2008 when he began training for triathlons. Since then, he has added mountain biking to his cycling resume. He currently rides a Specialized Roubaix road bike and a Specialized Stumpjumper mountain bike. “Cycling is a great way to stay or get in shape,” says Steve. “It’s  an excellent medium to enjoy nature and the great outdoors.”  Steve takes particular pride in helping injured cyclists, “We cyclists need to stick together. Representing injured cyclists is like protecting one of my own.”

Steve graduated from Brigham Young University in 2007 with a bachelor’s of arts degree in Advertising and Marketing. He completed his Juris Doctorate at the University of the Pacific, McGeorge School of Law in 2011. While at the McGeorge School of Law, he was named to the Dean’s Honor List for the 2010 – 2011 academic year. He was also a top-scoring member of the prestigious McGeorge School of Law Traveling Mock Trial Competition Team from 2010 to 2011. He was honored to study under Supreme Court Assistant Justice Anthony M. Kennedy in Austria in 2009.

Following graduation in 2011, Steve became a member of the Sacramento County District Attorney’s Office in California, where he was involved in the prosecution of misdemeanor and felony cases. In 2012, he opened his own law practice in Sandy, Utah, where his firm provided contract-attorney services to a number of Salt Lake City’s largest law firms. Early in 2013, prior to joining Craig Swapp & Associates, he returned to California, where he practiced law with the Seegmiller Law Firm and was engaged in plaintiff’s personal injury law, including litigation.

Other than cycling, his personal interests include golfing, Ironman 70.3 triathlons, surfing and snowboarding.